Updates and News from the Daniels Fund. 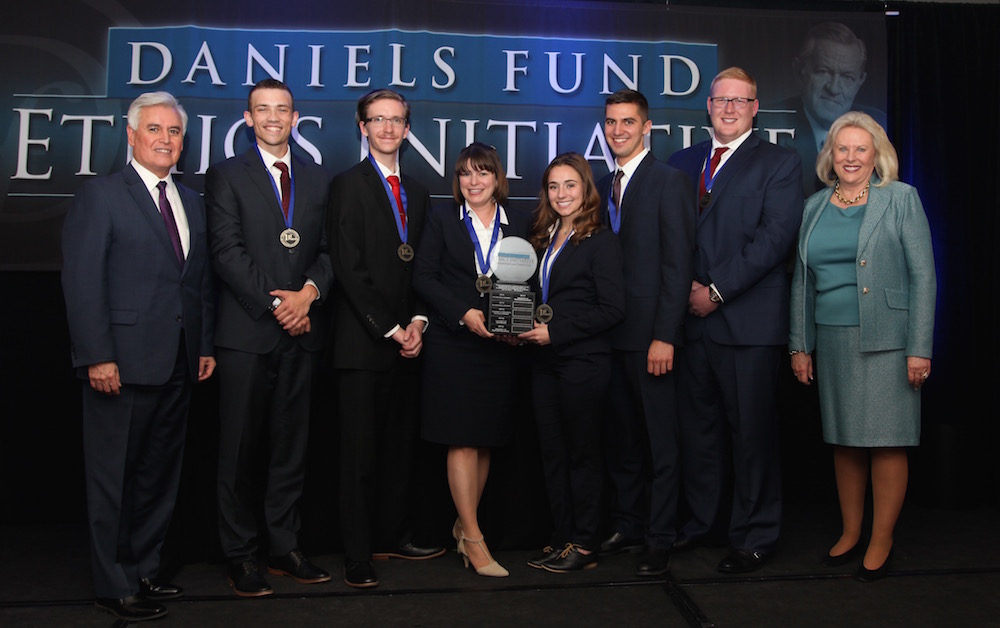 The Case Competition exposes college students to a thought-provoking business ethics case, similar to a situation that they might face in their professional careers. It is designed to challenge students' ethical reasoning, give them tools for ethical decision making, and raise awareness of the importance of principle-based ethics.

In advance of the competition, teams were provided with a business ethics case involving a fictional company which has introduced an implantable smart phone-like device. They took on the role of a hired consultant to the fictional company in the case, conducted an analysis of the ethical issues involved, and prepared recommendations. At the competition, each team presented their recommendations to a panel of judges. After a question and answer session with the judges, the team received a second part of the case — a crisis that provides new information and puts a twist on the case. They had just four hours to re-analyze their original recommendations, and make a second presentation to the judges.

The panel of judges was comprised of eight business and community leaders, and evaluated presentations against established criteria, including the Daniels Fund Ethics Initiative Principles: integrity, trust, accountability, transparency, fairness, respect, rule of law, and viability.

About the Daniels Fund Ethics Initiative Collegiate Program
Reflecting Bill Daniels' personal commitment to ethics and integrity, the Daniels Fund Ethics Initiative Collegiate Program was established in 2010 to foster a high standard of ethics in students and to strengthen the teaching of principle-based ethics in young people. The five-year pilot was launched in 2010 with eight business schools at universities in New Mexico, Colorado, Utah, and Wyoming. Due to its success, the initiative was renewed for another five years (2015-2019), and expanded to include two more business schools and one law school.

About the Daniels Fund
The Daniels Fund, established by cable television pioneer Bill Daniels, is a private charitable foundation dedicated to making life better for the people of Colorado, New Mexico, Utah, and Wyoming through its grants program, scholarship program, and ethics initiative. Visit DanielsFund.org/ethics/daniels-fund-ethics-initiative-overview.


Media Contact: Bruce Wilmsen
Direct: 720.941.4429
This email address is being protected from spambots. You need JavaScript enabled to view it.